Teaching Digitally with the ARSP

Teaching Digitally with the ARSP

Having been involved in the first stages of what has developed into the American Religious Sounds Project, what excites me most about the latest iteration of the archive is its potential for use in the classroom. The homepage features a Teaching Resources pulldown that includes seven class activities.

Last fall my colleague Amy DeRogatis brought to my attention Activity 1, which asks students to listen to sounds from the Archive and classify them into three categories: sounds that are religious, sounds that may be, and sounds they think are not religious. Then, explain and compare their choices in the full group. I used this toward the beginning of the semester and was pleased by the results, as students recorded their choices on the board and explained their thinking.

It’s worth noting here that as most of us are scrambling to develop remote teaching strategies because of Covid-19, assignments using the ARSP archive are even more useful. For example, one of the assignments in the course I am teaching now, on music and chant in religion, required students to conduct an observation report based on a site visit to a local faith community. Obviously that assignment is impossible to carry out this spring. Instead, I created an alternative that requires students to immerse themselves in the Featured Exhibit on Mennonite Voices, using the various clips and sound samples as a way of understanding Mennonite Christianity as a distinct music-culture.

But earlier in the semester, when Coronavirus was a vague and remote threat, I developed another exercise using the ARSP archive. In it, students use the MSU classroom instructional system, D2L. One of the assignments is a weekly ungraded Discussion Forum where students write responses to a question or two on the week’s reading. We typically will discuss the question and their responses during our class meeting. A major focus of the course is looking at religion sound in five of the world religions: Hinduism, Buddhism, Judaism, Christianity, and Islam. The textbook we use is Guy Beck’s Sacred Sound: Experiencing Music in World Religions, which includes six or seven mostly canonical sounds for each religion.

After teaching the course a number of times with a focus on the most venerable and traditional sounds, I realized it was doing students a disservice not to give more attention to more contemporary and popular sounds of the various religions. So, the first week they read a chapter from Sacred Sound, which emphasizes the traditional sounds, and the second week they read a chapter or two from Partridge and Moberg’s Bloomsbury Handbook of Religion and Popular Music, several of which are very useful.

In my exercise for the D2L Discussion Forum (actually a variation of Activity 2), I have students listen to all the selections for a particular religion in the ARSP archive, then answer two questions: which sound conforms most to what you expect a particular religion to sound like; and which seemed most surprising, I’ve found that most students choose the same two or three sounds for each question. In class we discuss why they made their choices. This has led to some interesting discussions. 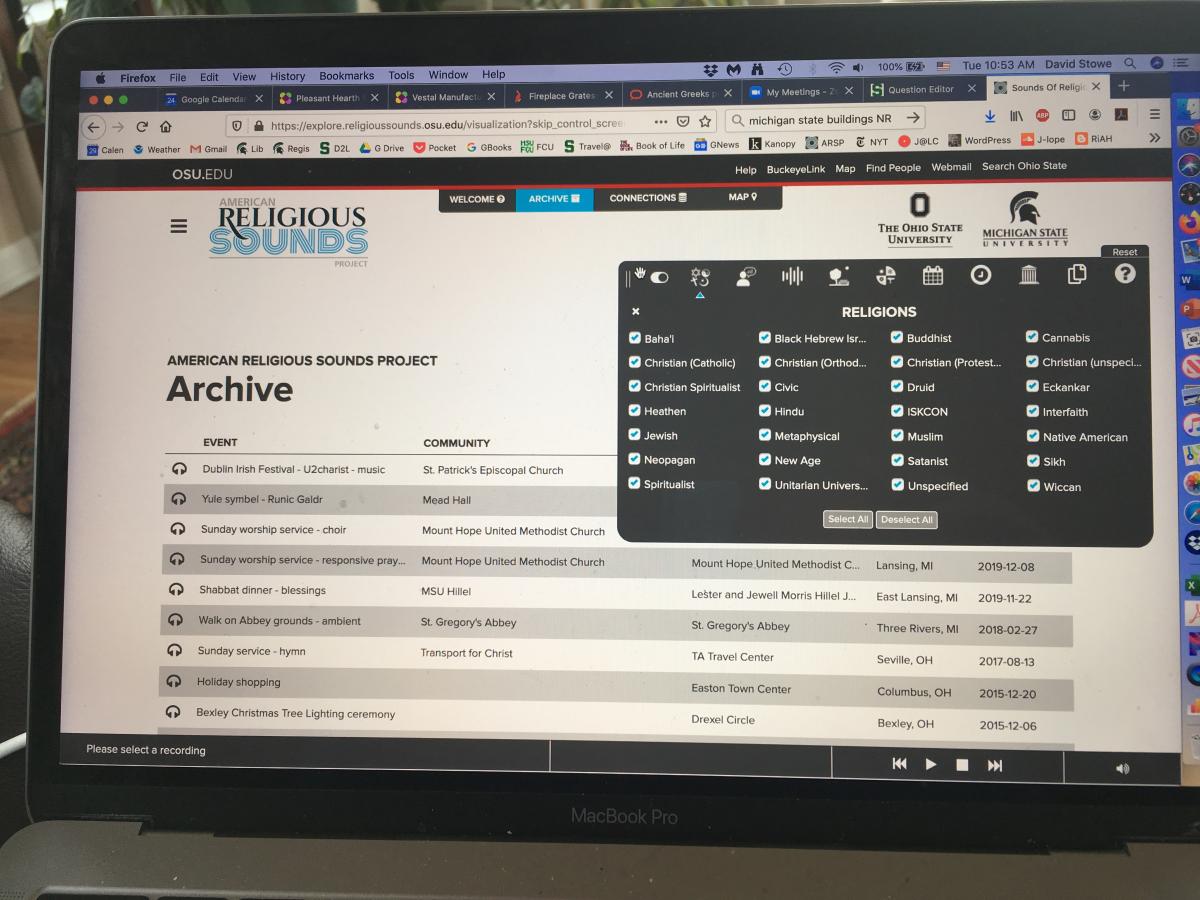 For Jewish sound, for example, why did most students choose the Friday Evening Shabbat Service, or the Nighttime Sh’ma Prayer? What do they make of the use of musical instruments in these contexts, when we have already considered the various restrictions that have been placed on instruments in worship?

Do we react differently to singing in English rather than Hebrew? What about Jews participating in an interfaith service that makes no particular reference to Jewish beliefs? Does the fact that an acapella group is made up of Jewish students in Hillel make the music more Jewish? What is the importance of space? The fact that a meeting or service takes place in a synagogue, as the Karma Thegsum Chöling Buddhist community meeting at Congregation Tifereth Israel in Columbus after their own dharma center burned down?

Finally, the exercise prompts us to recognize and acknowledge our preconceptions and stereotypes about a religion, and to test them against the more factual materials we are covering in the course.

I deployed this exercise for the first time in our two-week unit on Buddhism. Since it proved interesting, I tried it again with Judaism, and plan to use it with Christianity and Islam. Christianity poses a unique problem, in that there are so many samples in the archive. We will need to limit the sample, possibly to Catholic, to Orthodox or to Unspecified Christian. In fact, I am now thinking about assigning this exercise as part of our second exam.

No doubt this activity can be refined and improved. I look forward to hearing from others and continuing to experiment with ARSP in the classroom. In these weeks of turmoil and reinvention in our classrooms, it is an ideal time to experiment with the rich holdings of the ARSP.