Tricycle, the leading independent journal of Buddhism in the West, has featured the work of the American Religious Sounds Project in a May 16 article by Sheila Burt. Lived Religion in the Digital Age 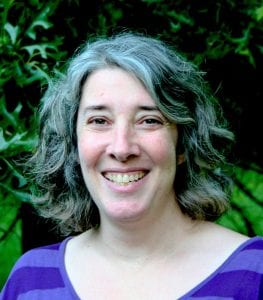 The American Religious Sounds Project is thrilled to announce that Alison Furlong will join our team as Project Manager! Alison graduated with a Ph.D. from the ethnomusicology program of the Ohio State University School of Music in 2015. Her dissertation dealt with churches as alternative spaces of music-making in the former East Germany, and she has presented her work at meetings of the American Folklore Society, German Studies Association, American Musicological Society, and Society for Ethnomusicology. In 2016, she published an article entitled “Politics, Faith, and the East German Blues” in Colloquia Germanica. Prior to graduate study, she worked for many years in the tech industry.

ARSP at the AAR 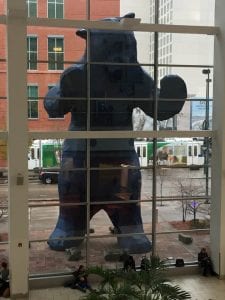 The ARSP team recently traveled to Denver, Colorado, for the American Academy of Religion (AAR) Annual Meeting, held this year at the Colorado Convention Center. Each November, the AAR conference brings together thousands of scholars, journalists, artists, publishers, and others from across the nation for several days of panel discussions, exhibits, and events.

In September, ARSP co-directors Isaac Weiner and Amy DeRogatis participated in a public conversation with artist James Webb at the opening of his sound exhibit “Prayer” at the Art Institute of Chicago. What do we gain as researchers by listening for religion in the city? This was one of the questions I posed to students in my second-year elective course, “Arch City Religion: Religious Life and Practice in St. Louis,” last spring. A joint, multidisciplinary project between Michigan State University and The Ohio State University that examines sounds of religion throughout the United States, and which first began in 2015, recently received a three-year, $750,000 grant from the Henry Luce Foundation to support expansion of the project. The grant was approved in conjunction with a request for proposals issued by the Luce Foundation’s Theology Program. From the Visual to the Sonic

As the ARSP multimedia content producer, I create audio clips, collages, and essays from recordings gathered by the project’s student and staff researchers. In my editing, I try to tease out specific themes (such as food and drink in religious practice, and the presence of religion during protests, to name a couple). I also call attention to unexpected sounds, such as the roar of a landing plane during a Serbian Orthodox chapel blessing, or the rumble of idling semi-tractor trailers just outside of a travel center chapel.

However, my focus on religious sound is relatively new. My background is primarily in documentary photography. Since 2010, I have specialized in documenting faith and religion, and have used my camera to explore both formal religious rituals and the intersection of belief with life and culture. Before the ARSP, I had experience working with audio, but I still thought of it mostly as an accompaniment to visual media.

On October 20, the ARSP leadership team gathered at OSU for an all-day brainstorming session with our three pilot site coordinators. In Spring 2018, our project will be incorporated into university courses led by Christopher Cantwell, at the University of Wisconsin-Milwaukee, and Rachel M. Lindsey, at Saint Louis University, as well as a similar research project led by Kathryn McClymond, at Georgia State University.