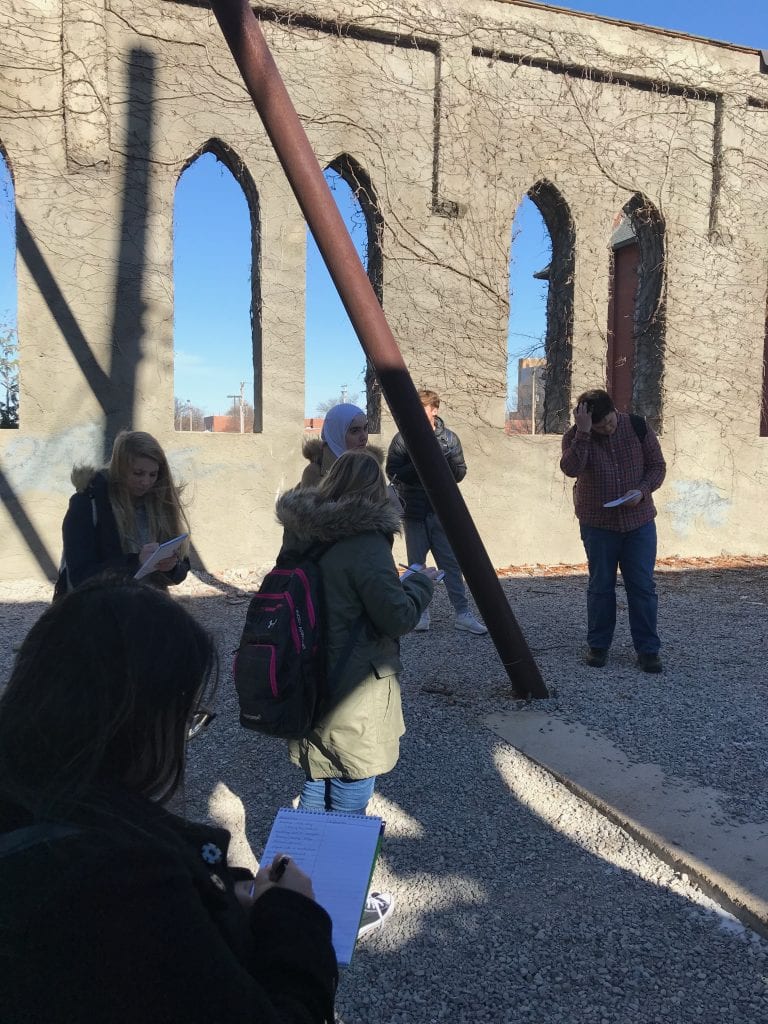 What do we gain as researchers by listening for religion in the city? This was one of the questions I posed to students in my second-year elective course, “Arch City Religion: Religious Life and Practice in St. Louis,” last spring. Like many of us who teach religion in American history, I had long incorporated music, audio clips of sermons, podcasts, and other forms of recorded sound into course content. The previous year, when teaching this course, I had come across some material relating to my university’s early adoption of “the radiophone” in the early 1920s as a civic and theological instrument and had contextualized that material with studies of religious sound by Isaac Weiner and Lerone Martin, among others. This year, with the considerable advantage of working with the American Religious Sounds Project, I was eager to seize the opportunity to build audio storytelling into the course design. Several weeks into the semester students got their hands on the Zoom audio recorders that would transform them from users into producers. In addition to identifying and analyzing sound as a largely unscrutinized register of religious life and practice, we were now jumping through the looking glass. Instead of using content that had been created by others, we now had to decide, before we clicked any buttons, what religion is and how best to translate lived aural experiences into meaningful archival products.

My research and teaching often center visual and material cultures of religion. Over the last several semesters I had begun to incorporate sound studies more directly into my classes, largely inspired by the work of the ARSP and its previous iterations. When the opportunity came to develop a more rigorous pedagogy of sound in my classes, I seized it, not only as another critical register for the study of religion but also, and more immediately, because there is perhaps nothing more emblematic of urban life than sound. Translating ARSP objectives into the pedagogical architecture of my second-year elective, one of the course objectives was to develop a critical awareness of creative and ambient sound in observations and analyses of religion in St. Louis. Alongside studies of urban religion that work to differentiate “religion in the city” from “religion of the city,” which lead to explorations of religious diversity and the role of religion in public life, we read about sound as a historically contested marker of religious practice. We learned about histories of recorded sound that have shaped the modern religious landscape. And we listened. We listened to podcasts, radio broadcasts, and the streets of St. Louis. And this time, before we listened to much audio content, we focused our attention on how we hear. Whether residents of the city or rural commuters, we each began to interrogate how sounds shape our ideas of the city and our responses to specific urban experiences.

On that first day in February when students finally got their hands on the Zoom recorders, they broke off into small teams and scattered across campus. On this day, their assignment was to listen. That’s it. Take the recorder, your headphones, your instruction manual, figure out how this thing works, and pay attention to what you hear—not, necessarily, to what is being said, but to what you hear. After a few hiccups, each group found a place to practice. At the end of the class period, the groups came back to debrief their experiences. The campus recreation center, a Starbucks, study spaces, the library, the West Pine Mall (a former city street transformed into a pedestrian thoroughfare that cuts through the heart of campus), each of these places had become sites of intentional listening. After a bit of prodding, students started to reflect aloud. Several students commented that they felt different in these familiar spaces, that the recorder had somehow altered their relationship with spaces that they pass through every day. Others noted that it took them longer to prepare the recorder for use—right setting, right volume, right position—than they had anticipated. One comment from that first practice session was echoed by several other students—“I heard better than I do with my own ears.” This student may not in fact have heard better, but she recognized that she listened differently, that she was attentive to the minute sounds of campus life that she often tunes out, through the deliberate act of recording ambient sound. This student may not remember when the first mosque was built in St. Louis or why I made her read about the Veiled Prophet or even, mercy, how the early history of Catholic immigration has shaped the city we know today. She has probably sold back all of the books she read in the class and archived or tossed the essays she wrote. But I have a hunch that she will remember for many years that time in college when she learned to listen, really listen, to the world around her.

Like the sounds of campus life, the sounds of religion in the city can be striking both in their novelty and in their newly recognized familiarity. Building on their initial observations and practices, Arch City Religion students went on to create a range of audio storytelling projects, from podcast reviews of Matthew J. Cressler’s Authentically Black and Truly Catholic, to semester projects exploring the religious history of coffee in St. Loui, to an audio postcard of the Bible Garden at the Missouri Botanical Garden: 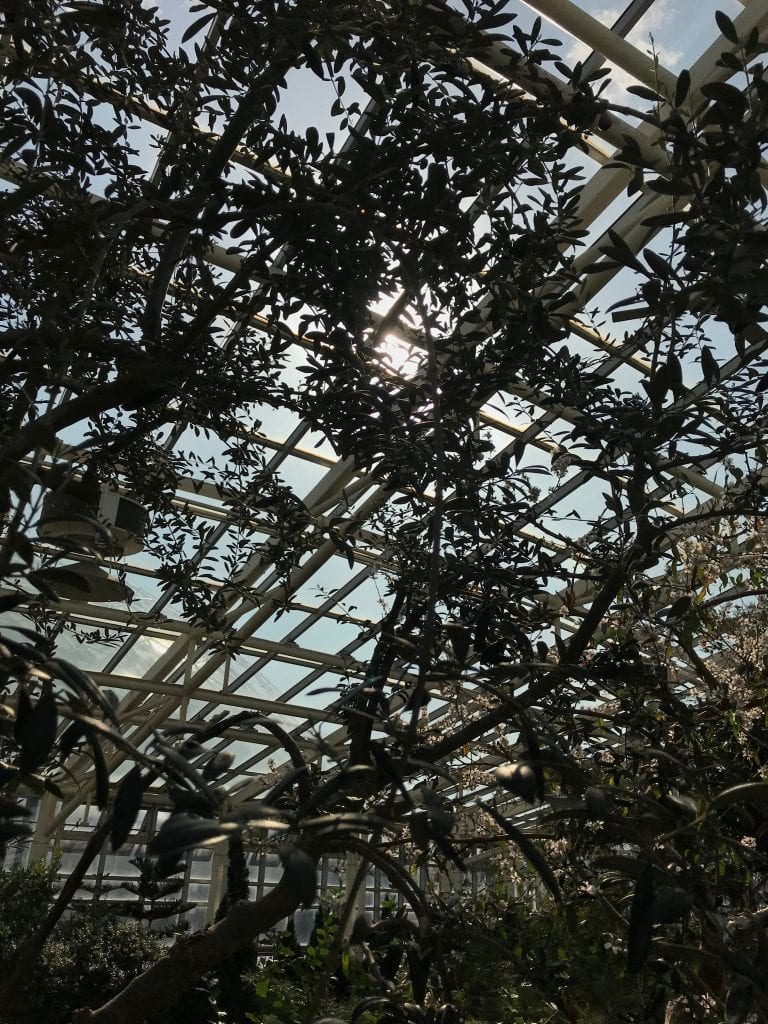 Some of them are excellent and some need more work. But even the rougher products demonstrate a new method of engaging religion that is difficult to unhear. Attending to religious life and practice through sound works to bring the subject of study—”religion”—into focus as it is lived in the messy realities of a culturally, politically, racially, and economically diverse city. My approach to these outcomes is to teach students to use digital tools not as biological proxies that document specific events but as instruments that train us to attune to the cultural work of our bodies and senses.

Similar to other urban centers throughout the country, the city of St. Louis has a checkered history of defining religious sounds as public noise, from church bells in the 1910s to Muslim calls to prayer in the 2000s. Attending to the soundscapes of the city’s religious life—the bells of St. Ambrose in the Italian Catholic neighborhood of “The Hill,” drummers at the Festival of Nations in Tower Grove Park, the clink of coffee cups settling into their saucers at Crave Coffee House, excited footsteps of hundreds of Hindu faithful carrying their deities on chariots through the streets of west St. Louis County, the fullness of quiet reflection in Buddhist monasteries, Catholic convents, and municipal gardens—teach us not only to think about religion in new, potentially revealing ways, but also to hear each other through the sounds of our neighbors’ lives. It is probably a lot to ask of a college elective, but I am hopeful that our study of sound, guided by the ARSP, helps us to listen to each other better. Sure, there were scheduling mishaps, communication gaps, technology fails, and a low drum beat of controlled chaos as we learned how to hear the city through new techniques of scrutiny and analysis. Despite the challenges, though, I remain hopeful that this semester will be remembered less as a cautionary tale and more as a raspy first word, even a prefatory throat clearing, in the origin stories of many students who learned to hear better than they thought they could with their own ears.

Drummers at the Festival of Nations: 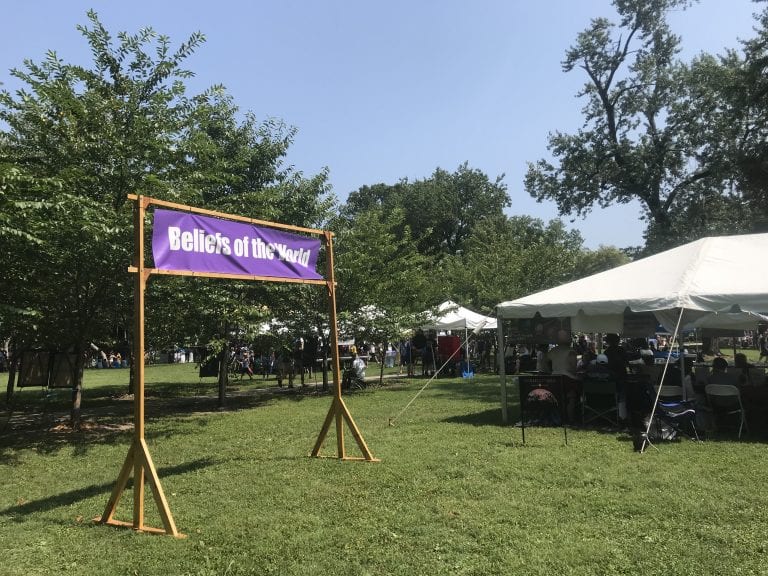