Praying at the Border

Praying at the Border

Dr. Rose Aslan, an ARSP Interpretive Scholarship grantee (read more about her work and see her recent exhibit here), wrote the following essay about Muslim and Christian activists who pray together along the U.S./Mexico border. The Border Church-Mosque suspended its service in March 2020 due to COVID. While the church has since been active, as of the publishing of this article, it is unclear if the mosque will start up again. 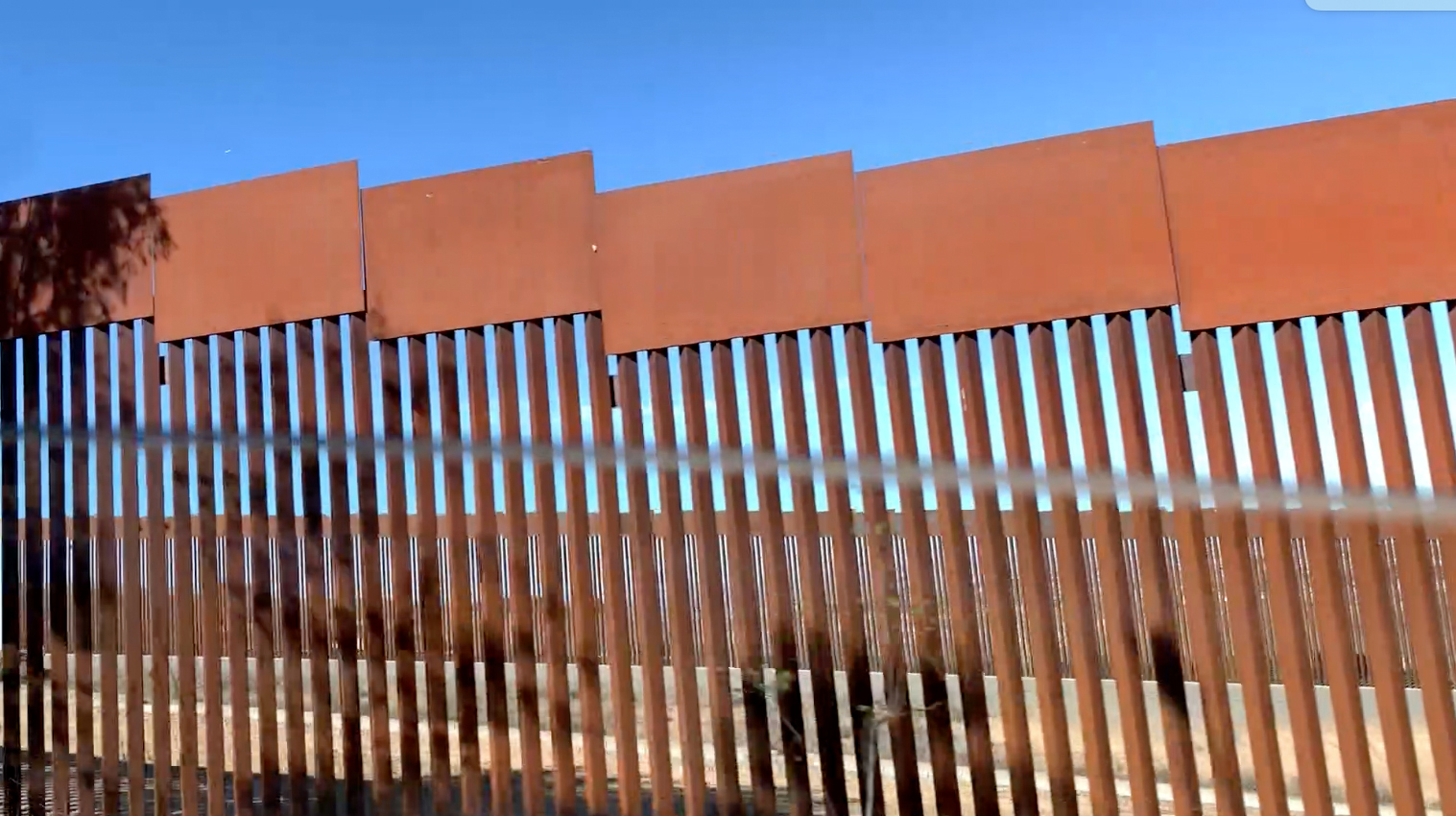 On a chilly day at the end of November 2019, a small group of about ten Americans, both Christians, and Muslims, gathered in San Diego along the pedestrian border entrance to Mexico. The organizer and members of the Latina Muslim Association led the attendees through a quick orientation on crossing the border and getting to a park by the beach in Tijuana. Accompanying the group as an observer and participant, I made my way with them through Mexican border control. After a short walk down a long passageway, our blue passports received a glance, and we found ourselves in Mexico. We took a short taxi ride to Parque de la Amistad (Friendship Park),1 right off the US-Mexico beach border. We found ourselves next to a small lighthouse and a park area that was a half-circle, the other half on the American side. The place was jarring, with the tall steel fence that dominated our view. However, it was also beautiful and cheerful, with colorful murals covering the wall and a tiny garden planted at its base.

The border wall consists of tall corrugated iron beams rooted in the ground. Tightly woven iron mesh covers the spaces between the beams to prevent people from touching one another or passing items through it. As a result, the only physical contact people can engage in is touching the tips of their pinkies to one another. The US side of the wall is the International Friendship Park located within the more extensive Border Field State Park. This area is carefully monitored and controlled by U.S. border control. On the American side, visitors are sometimes permitted to drive to the park, but they must hike around 1.8 miles at other times. In between the two parks lies the US federal patrol zone. In addition, visitors from the American side can only visit the park on Saturdays and Sundays from 10 a.m. to 2 p.m. In contrast, the Mexican side is always open and unrestricted.

At the park, dozens of people milled around, both Americans and Mexicans, some coming to observe the Sunday activities and others participating in the service. There was a cacophony of human interaction: some on megaphones shouting their political messages, others hawking their wares, some offering food and support to those in need, and others chatting with friends and family members on benches. A group of American Unitarian Universalists was in attendance. They were on a service trip to act as witnesses by meeting with deported US veterans, serving families in border shelters, and participating in the border church service. Another group present was a group of deported veterans. These men had served in the US military but had run into trouble with the law. They were deported before having had their green cards processed and were trying to lobby to gain access back into the US.

At another spot along the fence, there was a smaller group of people consisting of Americans from a nonprofit group called Independent California. This small organization campaigns for California to become an independent nation, seceding from the US and joining with Baja California as one nation. The activists eagerly offered history lessons to anyone willing to listen and shouted their demands. The entire space had the feeling of a festival. Food vendors sell elote (Mexican corn on a stick) and other snacks and toys around the park. Kids are running all over the place.

Several families and individuals were pressed against the border wall, speaking to loved ones between the thick mesh-and-steel barrier. The steel poles left a gap of several inches between them. The lower part was covered by a dense mesh, presumably to prevent people from passing things from one side to the other. However, it also prohibits meaningful physical touch between family members. They cannot hold hands, hug, or have any physical contact except by putting their fingers against the mesh and pressing against their loved ones' fingers. 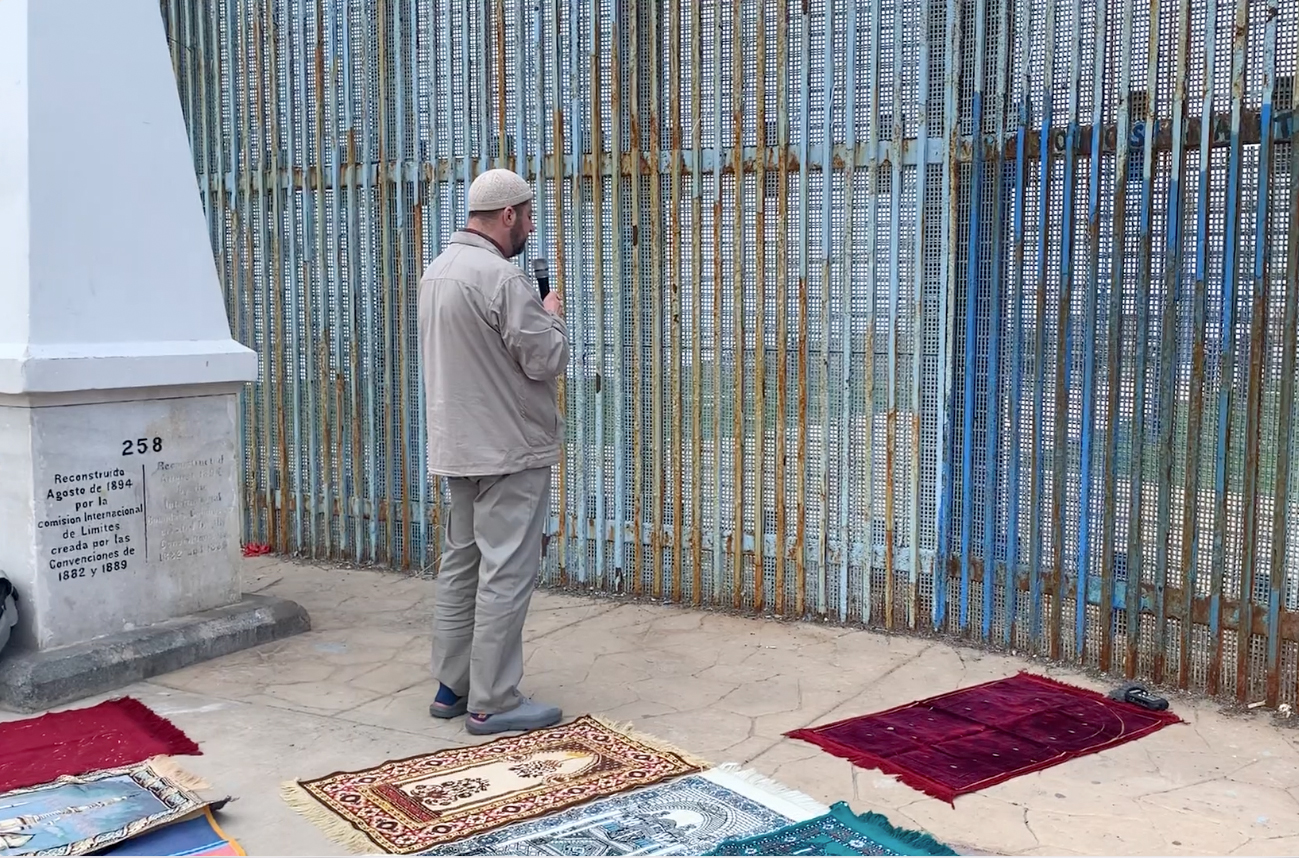 At 1 p.m., the Muslims begin the prayer service. Dustin Craun, the founder of the Border Mosque, explains the purpose of their gathering and offers a few words of solidarity and prayers. Imam Taha Hassane then stands at the front, facing northeast, in the direction of Mecca, and gives the adhan, or call to prayer, in Arabic, through the loudspeakers. The sound pierced the sound of nearby traffic, attracting gazes from passersby who had possibly never seen Muslims before.

The Border Church became a site of multi-faith solidarity in April 2019 when Craun founded the Border Mosque in collaboration with Fanestil and his team. The goal was to create a bi-national Islamic and interfaith prayer event between Tijuana and Diego.3 Craun recruited Imam Taha and coordinated the logistics of integrating the monthly Border Mosque into the already established Border Church. They held the first prayers in April 2019, hosting the Border Mosque every month. In October 2019, the well-known Muslim leader and speaker Imam Omar Suleiman joined the mosque from the American side. In December 2019, Rashida Tlaib, the Democratic Congresswoman from Michigan, prayed with the Muslims, participated in the Christian services, and gave a powerful speech in solidarity with families separated by the border.5

As both a scholar-observer and a participant who supports the cause espoused by the Border Church-Mosque, I was initially hesitant about joining in the prayers, surrounded by onlookers. I often refrain from praying in public, especially in visible settings, primarily because of the discomfort I experience praying in public in non-Muslim-majority contexts. However, I felt moved to join in this intimate setting of a small group of worshipers in Mexico. Even if only a few feet from the US, praying in public in Mexico felt different than publicly praying in the US. Praying in a country home to a small visible Muslim population lacking a history of anti-Muslim discrimination felt safer than in the US. In addition, it was comforting that people working for social justice and human rights surrounded us.

I joined the small group of worshipers in Dhuhr prayers with a small group of worshipers. We kept our shoes on as we stood on the pavement and prostrated ourselves on the prayer carpets, which had been spread out horizontally. Praying in a public space with so many non-Muslim onlookers felt strange. But it also felt empowering to pray in a safe place and to support the families who depend on the park to be able to see their loved ones. The Imam's voice resonated throughout the park with the help of the speakers. It felt even more poignant than being in a mosque.

After completing prayers, Imam Taha Hassane recited the Fatiha, the opening chapter of the Qur'an in Arabic. He read it in English, and his teenage daughter read the Spanish translation.

After mingling with the crowd, numerous onlookers came up to other Muslims and me and thanked us for our public worship. I was left speechless, shocked to have a non-Muslim thank me for praying in public. Immediately after sitting down, the Revs. Joel Hortiales, a Methodist pastor and Director of Hispanic/Latino Ministry and Border Concerns in the California-Pacific Annual Conference, and Pastor Guillermo Navarrete, a clergy member from the Methodist Church of Mexico based in Tijuana, led a communion service at the Border Wall. Rev. Fanestil, a Methodist minister, based in San Diego, joined the service from the American side, the shadow of his body appearing at the thick mesh covering the border wall.

Hortiales asked congregants to pray at the wall. Tens of people, most Christians and a few Muslims walked to the wall, holding onto the metal columns and mesh, stopping them from crossing into the US. Hortiales offered a fervent prayer in Spanish while a translator translated it into English.

Hortiales participated in leading the service with his fellow clergy members in Mexico. Many attendees partook in the communion, lining up to receive a holy meal of wine and bread. After the service, the Methodists, joined by the Tijuana-based Unified US Deported Veterans, under the umbrella of Veterans for Peace, served sandwiches to attendees, and people milled around and conversed.

For American Muslims, some of them with Mexican heritage, to cross the border into Tijuana to perform their prayers in the community, alongside the Border Church, is significant. It is a powerful, multi-layered way for US Muslims to stand up and protest the immigration policies of the US government. The core purpose for Muslims attending the event is to pray with other Muslims and observe and support the Christians in their faith-inspired activism. The prayer-protest event brings a sense of unity among Muslims. It creates a shared purpose between Muslims and Christians who have joined forces to fight for the same social justice causes. The Muslim and Christian prayers are separate, but they also feel intertwined. The two communities are invested in their political theology through public prayer, allowing outsiders to witness their most sacred rituals to create a sense of unity. The sounds of these prayers in an unlikely location emphasize the significance of this interfaith prayer service and help publicize their cause.

[1] See the website for the nonprofit that is campaigning to make Friendship Park a bi-national site that is open without restrictions from both sides: https://www.friendshippark.org/